Every brain is unique, just like one's fingerprints are unique. There have been many terms used to describe this uniqueness. I prefer brain bent. It refers to the type of brain you possess in terms of the way in which it processes specific types of information, what gets its attention quickly and what it pays attention to, how it manages data, and to your brain’s innate energy advantage, believed to exist in one of the four natural divisions of the cerebrum over the other three.

Most people are also believed to use parts of all of the brain all the time, although one cerebral division tends to take the lead when engaged in some specific tasks. Neurochemically, this means that when you are thinking using primarily your brain bent:

The cerebrum or thinking-brain layer is the largest chunk of tissue housed within the bony skull. It is constantly at work even though only a small percentage (5% - 10% by some estimates) of its activities surface to conscious awareness. The brain is not a simple organ but that hasn’t stopped people from trying to understand its functions! It has been said rather succinctly that if the human brain was simple enough for people to understand, it would be so simple they couldn’t.

Over the centuries, a variety of models have been developed in an effort to enhance our understanding of brain function. Although no model is completely adequate, because the human brain is so complex, models can help explain things that cannot be easily or directly observed. It is interesting to note that a quadrantal pattern has been used in a variety of descriptive models from as early as Hippocrates and Galen. (Refer to Brain Models for examples.) 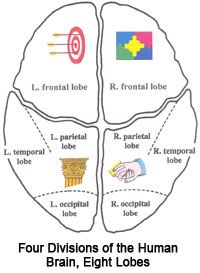 Natural fissures divide the human brain (also referred to as the cerebrum, gray matter, cortex or neo-cortex) into left and right hemispheres. Natural fissures further divide each hemisphere, creating a total of four cerebral divisions. (A plethora of names have been used to label these divisions including upper and lower quadrants, frontal and posterior sections, frontals and basals, and some by specific descriptive labels to assist individuals who have right-left confusion).

The two frontal divisions consist of one large lobe each.

The two posterior divisions consist of three smaller lobes each:

For purposes of discussion, say that you have a right-hand preference and expend less energy doing tasks that utilize your right hand (e.g., pounding nails, using a utensil to eat food). Now imagine that you break your right arm and end up wearing a cast for six weeks while the bones heal. You can learn to do many of those same tasks using your left hand. At first it may be extremely awkward. With practice however, you learn to do some of them very well, although you may always be aware at some level that it doesn’t “seem as natural.” When the cast is removed and you become accustomed to using your right arm again, you tend to revert almost automatically to using that right arm. It is a relief, gives you a sense of comfort, and utilizes less energy (although you still maintain some sense of developed competence with the opposite arm).

In general, it appears that this culture (and many others) reward males primarily for skills built in the left frontal lobe. Because of this, many males try to build skills in that section of the brain, whether or not they have a brain bent in the Prioritizing Division.

Females are primarily rewarded for skills built in the right posterior lobes. Therefore, many females try to build skills in that section of the brain, whether or not they have a brain bent in the Harmonizing Division.

Skills that utilize the left posterior lobes or Maintaining Division are often emphasized in industrialized America, so many males and females work hard to build these skills.

Regardless of gender, relatively few are rewarded for skills built in the right frontal lobe or Envisioning Division, at least during their lifetime.

Following are some correlations with the four cerebral divisions.

Use of Language (Quotes as Examples)