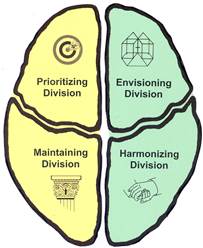 The word adapting comes from the Latin and has been used to describe the ability of your brain to develop skills and change in a way that permits you to fit into a new or specific situation. It describes behaviors that involve the development and use of skills that don’t match your own innate giftedness or energy advantage. (Refer to Procrastination below.)

Some adapting is desirable. It increases your options and gives you more opportunities to accomplish more activities. There is a big difference, however, between temporary adapting (desirable) and prolonged or excessive adapting (undesirable); between what your brain has learned to do well and what it does energy efficiently. It appears to be very wide spread and this can be especially true in regions where primarily only one or two divisions are rewarded or valued and when some divisions are rewarded based on gender.

As Michael Levine put it, Nothing is as stressful as trying to be a different person from whom you are.

The concept of adapting represents the quintessential different strokes for different folks. Activities that require one brain to adapt can represent giftedness in another. Activities that energize one person can exhaust another. When an individual is born with a pattern that is generally rewarded by or approved of by society for their gender they tend to adapt less. They are more likely to identify with, develop, and use their innate giftedness the majority of the time. 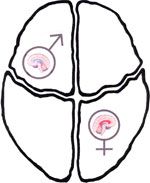 In the United States, especially in the WASP cultures, there are very clear rewards and expectations for performance based on gender and brain function. For example:

What types of activities do you tend to procrastinate? Procrastination can be a symptom of the brain attempting to avoid adapting. The brain knows the way in which it works most energy efficiently, even when you have not yet identified that consciously, and it will try to push you away from activities that require excessive expenditures of energy.

The key to success involves your ability to manage judiciously the amount of time you spend doing activities that require functions outside your innate giftedness, because those functions tend to consume significantly larger amounts of energy. A desirable overall goal is to match the majority of your activities in life with what your brain does energy efficiently. Achieving this goal requires awareness, knowledge, choice, commitment, and willpower. It also requires being able to manage who you are innately in the face of expectations of others who believe they know what is best for your brain.

Falsification of Type, a term coined by C. G. Jung, describes an individual who has developed a non-natural pattern of habitually using cerebral divisions other than the one containing the person’s brain bent. Jung observed that people tended to be interested and energetic when “leading” with their brain’s division of energy-efficiency. Conversely, when they tried to lead with one of the other three divisions, they experienced fatigue, frustration, and ultimately exhaustion. Jung believed that Falsification of Type represented a serious and potentially life-threatening problem with both practical and psychological ramifications.

For decades there have been attempts made to develop assessments to help individuals identify innate giftedness. For example:

These and other modalities are validating Jung’s perceptions that there is a huge cost to an individual (mentally, physically, emotionally, relationally, and perhaps spiritually) when the person is not living authentically.

Note: Jung reportedly believed that one’s position on the Extraversion/Extroversion-Ambiversion-Introversion Continuum was even more basic than brain lead. As such, people who are working and/or living in environments that do not match their innate position on the EAI Continuum are being forced to adapt. This may be a factor or co-factor in the person adapting in other areas of life including performing activities on a regular basis that are not aligned with his/her brain bent.

Since it is possible to develop skills through practice, why not aim for equal skills in all four cerebral divisions? Because prolonged or excessive adapting can exact a huge price. Remember, you pay for everything in some way or another. The cost may be recognized immediately or only become apparent somewhere down the line. And you pay primarily in energy (as energy is the basic medium of exchange in life).

Richard Haier MD used PET Scans (Positron Emission Tomography) to measure energy expenditures in a person’s brain (e.g., glucose usage) in relationship to the type of activities the brain was asked to perform. Metaphorically, the differences in energy expenditure may be as great as pennies on the dollar.

How can you handle tasks that don't match your brain bent?

Remember, you do have a whole brain—it’s just that you want to manage the amount of time you spend completing tasks that are a mismatch with your brain bent.

Be conscious about these mismtched tasks. Try to schedule them when you have more energy available. Remind yourself that you are choosing to complete the task as part of a total life-activities package even though it may not be one of your favorites. Do some brain breathing before you begin the task to energize your brain. Make jokes about the task and try to laugh and have fun with it. When possible request help from others if you are really getting bogged down.