“That does it!” Lars was in full roar. Greta had failed to stop for gas on her way home which, admittedly, was unhelpful. But so was Lars’s ranting, raving, and flailing of long arms that put at risk anyone within reaching distance.

“Greta should have!” Lars bellowed.

“So, send her now,” Great-Uncle Johan said, adding, “She’s seventeen? Maybe still some child. She’ll learn.” Silence. He turned to Greta. “So, this is so bad you have tears?”

“When Lars yells I cry....” Greta’s voice trailed off.

“So, he makes the huge noise like a bull elephant and you cry! Your eyes―they are connected to your ears?” Great-Uncle Johan raised an eyebrow and a shoulder.

“I don’t have time for this nonsense,” Lars began.

“Nonsense for sure,” Great-Uncle Johan agreed, interrupting. “So, you vant to spend your energy in tears?” He looked over at Greta, sniffing and wiping her eyes.

Then he turned to Lars. “So, you vant to spend your energy in loud?” Lars appeared a trifle uncertain, opened his mouth, and shut it again. “Look at your vatch, man,” Great-Uncle Johan directed. “Pick some time. How long you vant to waste on the angry?”

Lars looked at Great-Uncle Johan, then at Greta, and finally at his Rolex. “Two minutes,” he replied after a pregnant pause. He was beginning to feel slightly foolish. The situation seemed both ludicrous and ridiculous, and at this point he was having difficulty keeping his face straight.

“So, be you livid for two minutes!” ordered Great-Uncle Johan. “Go outside. Valk. Den Greta to get gas!” He turned to leave the room, shaking his head and muttering, “Big vaste of energy...all dis yelling and crying! BIG vaste of energy...!”

Lars and Greta looked at each other for a moment and then burst out laughing.

Great-Uncle Johan was right. Many people expend vast amounts of energy yelling and crying, often over a little blip on the screen of life. When negative behavioral patterns continue year after year, it’s like they are suffering from The Ostrich Syndrome: their heads stuck in the proverbial sand box, at least in terms of managing their emotions and feelings.

Not only do humans vary tremendously in their perception of emotions but also in their ability to identify, articulate, and manage them effectively—a challenge that ranks right up there in everyday living. Although the words emotions and feelings are frequently used interchangeably, they are notsynonyms in terms of brain-function. They even follow different pathways in the human brain!

Emotions are physiological changes that occur in response to an external stimulus or an internal one (such as a thought). They function as cellular signals designed to get one’s attention much as an orange highway flag is designed to alert a driver to a situation up ahead. When in the grip of a strong emotion, the human brain is in a biochemically altered state that comes complete with distinctive facial expressions, physiological markers, gestures, and actions. Candace Pert, the researcher who first identified opiate receptors in the human brain and was interviewed in the documentary What the Bleep? pointed out that each core emotion may relate to a specific neuropeptide, a brain chemical that influences mood.

Although beliefs differ regarding the number of “core” emotions, scientific evidence exists that facial expressions registering Joy, Anger, Fear, and Sadness are inborn and can be observed on the face of a fetus during gestation. Although there are hundreds of words related to emotions, likely they could be assigned to one of these four. Emotions translate information from the subconscious into conscious awareness and provide energy for constructive action. In this sense, all emotions are positive—although the actions exhibited around them may be negative.

Feelings, on the other hand, reflect one’s subjective interpretation as the brain tries to make sense of the physiological changes that result from the emotion. Human beings create their own feelings based on experience, learned behaviors, personal belief systems, and thought patterns―to name just a few. It’s empowering to realize that no one can force you to maintain a specific feeling over time. Others can provide a stimulus that triggers an emotion. But you take it from there in terms of feelings and behaviors.

The following table lists core emotions, along with a summary of their purpose, and examples of undesirable outcomes that can result from mismanagement. 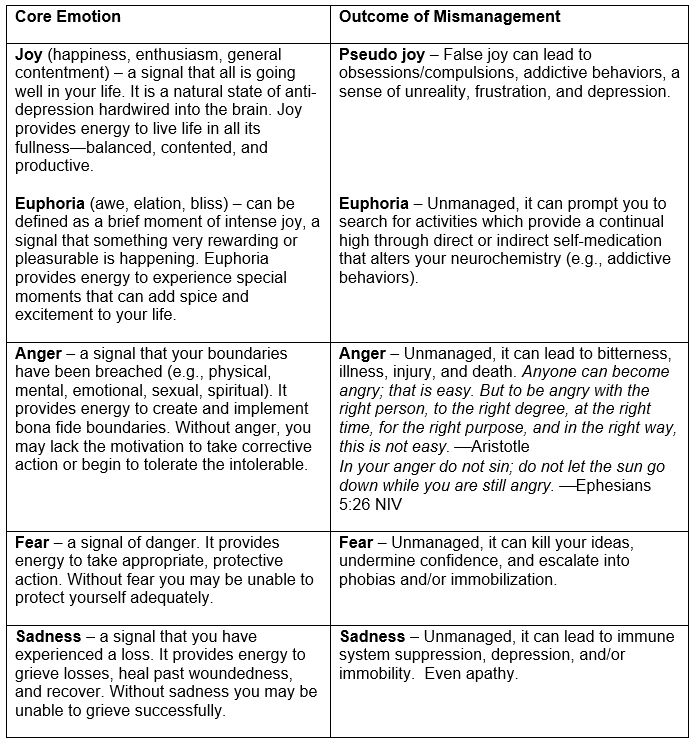 Shame and guilt are learned reactions that serve as interrupters to remind you of your human limitations. It can be difficult to differentiate between the two.

The Emotions Staircase portrays core emotions as a series of steps. Metaphorically, you will be standing on one of the steps at any given moment. With increased awareness of your own emotions and by implementing strategies for managing them more effectively, you can learn to spend most of your time on the step of Joy and typically move to another step only when the present situation warrants it. While not thought to be an emotion in and of itself, Apathy may represent a state of being emotional overwhelmed in which the individual becomes immobile. Human beings rarely try to commit suicide when in a state of apathy. They don’t have the energy! They can be at higher risk for suicide attempts as they begin to move back up the Emotions Staircase and get more energy.

Walking up the down staircase (as some term it) is a learned skill. Where it used to take days or months for some to recognize and resolve a protective emotion (e.g., Anger, Fear, or Sadness), it is possible to develop skills that enable you to walk back up the stairs to Joy in a matter of minutes or hours.

Following is an example of one way to use the Emotions Staircase to avoid taking things personally, spending needless energy because of another brain’s opinion, or becoming defensive. Here’s how one woman described the process.

Imagine a person approached me at a meeting with this comment: “The clothes you’re wearing don’t suit you.” The first thing I remind myself is this: although human brains—as members of the same species—are more alike than different, every brain is believed to differ in structure, function, and perception. Furthermore, all any brain has is its own opinion. Since my mind is very clear about this, rather than becoming defensive or overreacting, I begin to brainstorm possible reasons for a seminar participant to make a comment such as this to the presenter.

Since thoughts can fly across neuron pathways at rates of 400 feet per second, my brain suggests some possible scenarios:

If I want to know more about the seminar participant’s opinion, I can say, “Please be more specific.” If not, I can respond with, “Thank you for sharing your opinion,” and move on to another topic or return to the business at hand.

At my first opportunity, however, I will take a brief inventory. If there has been no negative impact to my brain, I remain at a position of Joy, understanding that the unsolicited opinion reflects that brain’s perception only and may have little (if anything) to do with my reality and the way my brain perceives.

If my brief inventory reveals that I am no longer at a position of Joy―that the comment did impact my brain negatively―then I need to take conscious action to resolve that negative impact. After all, every thought I think affects every cell in my brain and body.

Below is the typical self-talk process I would use to manage that comment and mentally reposition myself at the step of Joy on the metaphorical Emotions Staircase Model:

Good example. Obviously, it takes much longer to write this all down compared to the relatively short time required to go through the self-talk process. You need to develop your own style, recognizing that you pass through each emotion going both ways. However, during the actual event everything usually happens so quickly that you aren’t aware of this. Your goal is to move to the step appropriate for the situation at hand. Then, take the necessary steps to return to a position of Joy.

The following four steps will put you in a much better position to make conscious choices about the way you want to manage your emotions and feelings, the actions you decide to take, and the behaviors you choose to exhibit:

You can learn to identify your emotions accurately and recognize the information they provide. Then, take responsibility for the feelings you maintain and the actions you take related to them. (Sometimes the appropriate action is to do nothing—at that moment.)

You can hone the skill of processing an event with an emotional component (especially one that involves an overreaction) quickly and consciously. As your skill level increases and you learn to talk yourself through the process of living at Joy, you can role model for others and even teach the strategies to young children.

As Great-Uncle Johan would say, “Vat a deal!”