Lyria was life-threateningly over weight. Morbidly obese, actually. There was no other term for it. The scales could register up to 350 pounds and the needle hit the top before she had stepped up with both feet! A delightful woman—barely out of her teens—Lyria had enrolled in the Longevity Lifestyle Matters Program because, as she put it, “I feel sorry for my heart.” She’d heard that the heart had to pump blood through an additional seven miles of blood vessels for every pound of unnecessary fat. “That’s likely in the nature of several thousand miles of unnecessary blood vessels,” she said, wryly. “Doc says my blood pressure is dangerously high, to say nothing of making it almost impossible for me to go anywhere without being pushed in a wheelchair.” Tongue in cheek she joked she was in good company, at least in terms of numbers. They are high, the numbers. Over 2.1 billion people—nearly one-third of the world’s population—are either obese or overweight, according to a new, first-of-its kind analysis of trend data from 188 countries.

It didn’t take long to discover that Lyria did not understand the difference between a sensation of physical hunger and thirst or of a core emotion, for that matter. Consequently, she ate when she felt hungry, thirsty, happy, mad, anxious, sad, or you name it. When she was asked, “How do you feel right now?” her response was, “I feel hungry for pie.” It took a while for Lyria to comprehend that “hungry for pie” was not a feeling! In her case, “hungry for pie” was an indication that she used food to trigger her brain reward system. The dopamine that was released made her feel “better” for a short period of time, and then she would need to eat again.

Bottom line, Lyria exhibited addictive behaviors around food. It was her drug of choice—especially the fat, sugar, white flour, and other simply carbohydrates contained in the pie. No matter the flavor: pecan, lemon, pistachio, banana coconut, key lime, pumpkin, cherry, berry, rhubarb, apple, Boston Cream—just as long as there were a pair of pies. If Lyria ate any, she ate two. Pies, not slices!

When Lyria reviewed the Yale top addictive-like foods, she checked off all of them.

Lyria mumbled to herself through much of each meal. “Are you saying grace or complaining?” one of the program participants asked.

“Neither,” Lyria replied, chuckling. “I’m telling myself: I don’t want to eat two pies today. I don’t even want to think about two pies!” 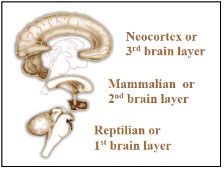 Lyria’s self-talk was unhelpful. When I asked her what picture she saw in her mind’s eye after repeating those phrases, she answered, “Duh! Two pies.”

That was no surprise. The brain tends to think in pictures. However, it is relatively easy for the brain to miss the word don’t. This is especially true of the subconscious brain layers; the reptilian or 1st brain layer (the brain stem and cerebellum), the mammalian or 2nd brain layer (portions of the limbic system), and around 80 percent of the neocortex or 3rd brain layer.

“You just gave your brain a map to follow: two pies,” I explained. “What could you do to reverse that mental picture?” Lyria had not a clue.

In truth, it’s not really possible to follow an open-ended negative instruction such as, “I don’t want to eat two pies,” or “Don’t think about two pies.” Even if you stumble on a strategy that endeavors to replace the picture of two pies with something else, you will always come back to thinking about the two pies, if only to remind yourself that you’re supposed to be thinking about something else!

When the brain hears the words “Don’t touch the stove,” it initially creates a picture of touching the stove. If it picks up on the word “don’t” then it must try to create a different picture, one related to the reverse of the first idea. This is a two-step process and difficult for an adult brain to accomplish—almost impossible for a child’s brain!

It is usually much more effective to say, “Keep your hands away from the stove.” That is a one-step process as the brain’s initial picture is of the hands being held away from the stove. It is clearer and takes less time and energy, since the brain doesn’t have to try creating a reverse picture.

Think back to your childhood. What did you hear? If you heard, “Don’t do this, don’t do that, you can’t do this, you shouldn’t do that,” your brain is likely filled with negative self-talk recordings.

Given that Lyria wanted to start living a Longevity Lifestyle, it was important that she get her “mindset” in hand. The brain can only do what it thinks it can do and Lyria needed to tell her brain what she wanted it to help her do. Instead of thinking helpless and hopeless thoughts, Lyria began seeing in her mind’s eye what she would look like when she reached her desired weight range. That gave her subconscious a “picture” to follow. The reptilian layer (think frogs!) and mammalian layer (all mammals) do not use language per se but they can follow the mental pictures that are created in the neocortex by language.

Secondly, Lyria also needed to get her “self-talk” on board. That meant she needed to change not only her thoughts but what she said to herself. Affirmation is the programming language of the brain. Stop talking about what you do not want to have happen and only talk about what you want to have happen. Lyria wrote down several phrases and repeated them several times a day using the new research-based self-talk style. Use your first name so your brain knows for sure who you are talking about. Use short, positive, present-tense phrases and sentences, and speak as if it is already happening.

I emphasized that affirmations must be followed by practical application. Saying “You drink a glass of water 30 minutes before you eat” is one thing. In order to build pathways in the subconscious so eventually this behavior becomes automatic requires the repetitive “doing” of what you are “saying.”

Lyria wanted to know the reason for speaking in the present tense as if what you want the brain to help you accomplish is already happening. Simple. The brain tends to get in gear to help you only when it perceives that right now is the time. When you speak in a future tense, the brain tends to think, “When the future comes I’ll help you. But if the past is any indication, by next week you’ll have forgotten all about it. Just think how much time and energy I’ll save.” And indeed, since you’re speaking in a future tense, you never arrive at that future point, so to speak. On the other hand, when you use present-tense words and phrases the brain thinks, “Wow! I better get with the program!”

Is using an affirming communication style a simple concept? Absolutely!

It is easy to change a life-time of self-talk patterns? No!

And it can be done. Lyria did it.

Several months later when she returned for an alumni program, she could actually step onto the program scales without the needle hitting the maximum! Not only that, her blood pressure readings had dropped significantly as had her cholesterol levels—and she could actually walk around the block on her own two feet!

When it was Lyria’s turn to recount her journey toward better health, over a hundred program attendees listened intently. It was obvious that life had already vastly improved. She concluded her short presentation with these words: “There have been times when I opened my mouth to say something and could not think of a single way in which to state my thoughts in a positive style. But practice helps. I am not biting my tongue nearly as frequently as this new communication style is becoming easier and easier. In addition, I am following my words with actions to build software in my subconscious. Do I wish I could have learned this earlier in life—when I was five instead of twenty-five? Definitely. But, better late than never!”

Hey, at twenty-five she was half-a-century ahead of some of the other program attendees!

Life does go better with an affirming communication style. Gradually, you begin to speak to others in the style you are using with yourself, which tends to increase cooperation and compliance.

Does it prevent all problems? Of course not! It does give your brain a one-step picture to follow, however. I call it the “Affirmation Advantage,” and it can be used in any area of life.

As Lyria said, better late than never. And there’s no time like the present to get started!