Smell is a potent wizard that transports you across thousands of miles
and all the years you have lived.
—Helen Keller

“No, no, no! Stinky, stinky, stinky!” cried my little brother. Red faced and puffing he tugged frantically at winter clothing that had just been released from their moth ball infested cardboard prison. Watching his discomfort jump-started my interest in the sensory systems, sensory preference, and eventually in synesthesia.

The odor of moth balls didn’t particularly bother me. My brain cringed if a moth ball failed to release itself from my clothing and I accidently sat or stepped on it. Oh my! The sound of crunch was right up there alongside the grating screech of fingernails across a blackboard. (Yes, I grew up with blackboards!)

Not sound, sobs, or odors seemed to bother our mother. How we looked, did. She would calmly continue stuffing us into winter clothing saying, “Well, we wouldn’t want you to go out in public with moth holes in your clothes now would we?” My brother for one certainly didn’t care. Clearly he was more invested in how things smelled. And if he became ill? Oh my! Then, he was beyond sensitive to how things smelled. And there is some anecdotal evidence to suggest that smell may be the first sense to be impacted when a person doesn’t feel well.

Human beings relate with each other, the world, and with nature through the senses. If there is any other way to do so, I don’t know what that would be. Unimpaired, people can use all sensory systems. Typically each will have a sensory preference, although a nonpreferent system may predominate in specific situations.

Sensory preference may be observed from birth or perhaps even before in some (e.g., kinesthetic babies sucking a thumb or finger in utero). Very young kinesthetic children may be seen touching anything that is soft such as the satin border on a blanket and being especially sensitive to the feel of something against their skin and to odors or flavors.

The Smell Survey of1.5 million participants done by the National Geographic Society in 1987 showed that age brought with it little decline in smell ability among respondents.  That’s good news since much of taste is contingent on the sense of smell. The study also reported that:

Odors do impact human beings for good, bad, and indifferent. And they’re powerful. Just pay attention to quotes about smell. Here are a few of my favorites:

I like that last one especially. Perhaps because my middle name is Rose (a favorite family name stretching back for several generations on my mother’s side).

And then there’s all the complex routing of the sensory data entering through the brain stem to the correct decoding centers in the cerebrum and in the limbic area. Without the decoding process your brain would be unable to make sense of the sensory data. In that case you might be diagnosed with specific anosmia, the label for a condition described as odor blindness.

As I grew older, I kept looking for information and research related to the sensory systems, sensory preference, and the phenomenon of synesthesia, a condition in which the stimulation of one sense prompts a reaction in another sense. Here are some of the things I discovered. 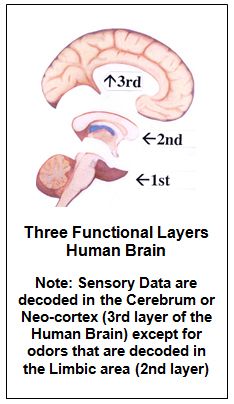 Olfactory receptor cells—neurons in your nose that allow you to smell—are neurons that can regenerate throughout life. Although these cells are continually being born and dying, they maintain the same connections as their ancestors. The result is that once you learn a smell, it always smells the same to you despite the fact that there are always new neurons smelling it! According to Rita Carter in the book Mapping the Mind, smell is the exception to the brain’s cross-over rule. That is, odors are processed on the same side of the brain as the nostril that senses them.

The work of Bandler and Grinder related to Neurolinguistic Programming or NLP, along with that of others, has added a great deal to the sensory-systems information base and the impact of the senses on communication, learning, and behaviors. In their book Reframing they reported thatdue to the way smells are processed neurologically, they have a much more direct impact on behavior and responses than do other sensory inputs.

Sensory preference was especially fascinating to me. What lay beneath the concept that some types of sensory data appeared to register more quickly and intensely in a person’s brain? There seemed no consensus, however, about the underpinnings of sensory preference. Did triggers involve Epigenetics (cellular memory), heritability, learning, all of these or something else altogether?

Studies by Kaisu Keskitalo and colleagues in Finland has provided data that shines an interesting and potentially helpful light on these questions. According to the researchers, human beings have an innate preference for sweet taste, but the degree of liking for sweet foods varies individually. They decided to study the proportion of inherited sweet taste preference and performed an analysis of a genome-wide linkage to locate the underlying genetic elements in the genome. An article outlining results of their work was published in The American Journal of Clinical Nutrition under the title: “Sweet taste preferences are partly genetically determined: identification of a trait locus on chromosome 16.” This paragraph appeared at the end of the article:

“In conclusion, individual differences in sweet taste preferences appear to be partly heritable. A locus on chromosome 16 was found to affect the use frequency of sweet foods. This result can be considered to be very significant, because a sweet taste preference has not been previously shown to be heritable in humans. This observation broadens our understanding of human food choice. “

If an aspect of kinesthesia (e.g., sweet taste preference) is at least partially heritable, additional studies may reveal that other aspects of sensory preference also have some heritability.

And the anecdotal saga of familial sensory preference? My brother, no longer little, continues to be highly sensitive to odors, tastes, and how things feel against his skin. Up until her death, our mother consistently was interested in how things looked. I am aware of sounds usually before any other type of sensory data gets my attention.

Have fun exploring this information. I certainly do!

Note: Multiple resources related to the senses, sensory processing, and sensory preference, are included on my website under Brain References. The Sensory Preference Assessment is available free of charge at www.arlenetaylor.org.