“We won!” exclaimed Josh, sliding into his chair at the dinner table. “Seven games in a row. I love playing Aussie Rules!”

“You love winning,” said his brother, Ned. “Me? I’m not into competition.”

“I like women’s footy, especially when we ditch keeping score and just have fun figuring out new plays,” said Janet.

“What’s the point of playing if you don’t keep score?” asked Josh. No one answered.

“Some brains like competition, others don’t. Some like to play, others prefer to watch,” said their father, helping himself to more mashed potatoes and gravy. “I played footy from the time I could chase a ball. My brother, on the other hand, not so much. Your Uncle Perry would rather work with leather than chase it. Probably the reason he now makes footy gear. And he’s very good at what he does.”

“No chasing leather for me,” said Ned.

“I must have inherited your competitive genes, Dad,” said Josh.

“That, and perhaps cellular memories (epigenetics) from your father’s years of playing,” said their mother. “He had twenty years of footy under his belt before we met, married—and made you.” They all chuckled companionably.

“What makes a person love competition?” asked Gina. “I like to win when we play games during physical education, but never so badly that I try to break the rules or cheat like some do. That makes me very uncomfortable.”

“The love of competition likely has multiple underpinnings,” said their father. “Genetics, epigenetics, opportunities and expectations, perceived rewards, encouragement from family and mentors—and certainly, individual brain differences. For example, an extroverted brain like yours, Josh, thrives on the stimulation competition offers. An energy advantage in the left frontal lobe or prioritizing division of the cerebrum contributes, too, as that part of the brain wants to win. Ned’s brain, on the other hand, leans toward introversion, preferring less stimulation in its environment. His energy advantage is more likely linked with the harmonizing division, concerned with connection, empathy, and helping others.”

“But I’m happy to cheer in the bleachers,” said Ned. “I can actually get quite pumped at times—as long as I’m off the field.” He laughed. 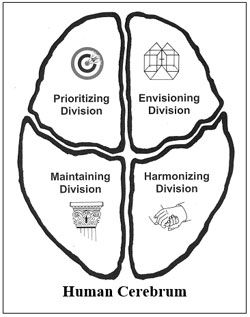 “The testosterone effect,” said their mother. “In addition to surges related to developmental periods, testosterone secretion increases in the presence of any form of competition, including active participation in a competitive situation or virtual participation through observation. Assertive-aggressive behaviors tend to escalate in both genders as testosterone levels rise—although the relative rise appears to be more dramatic in males than in the females. Dr. Michael Gurian points out that although testosterone levels go up with competition in both males and females, males have a much higher testosterone baseline, which makes males on average more aggressively competitive than females.[1] The relationship between testosterone and assertiveness is more complex in females according to Dr. Helen Fisher. Levels of testosterone in females do not appear to rise and fall based on wins or loses in sports as levels do in males.”[2]

“The desire for sex arises in the hypothalamus, stimulated by hormones, especially testosterone,” said their father. “And males have 10-20 times more testosterone.[3] Competition raises testosterone levels, rivalry fuels aggression.[4] Since testosterone tends to increase in the presence of competition, dating directly after an exciting competition (e.g., football game, track and field competition) can be a risky affair. In fact, the testosterone phenomenon may play a factor in date rape.”

“We best all remember that,” said Ned, nodding

“The thrill of competition can increase adrenaline levels in a person’s body, too,” said their father. “As adrenaline levels rise, so does dopamine, the feel-better chemical. Some individuals pursue competition because they are addicted to their own adrenalin and dopamine, released in the presence of competition. That underscores the importance of balance in life. Even a good thing taken to the extreme can result in negative outcomes.”

“So what about our brains?” asked Janet. “Gina’s and mine?”

“My guess is that your brains are probably ambiverted,” said their father, “although there will be differences since every brain on this planet is unique. No two brains are exactly the same and each person’s brain operates most efficiently when involved in activities it does best.[5] You girls each enjoy some stimulation followed by some quiet recovery time. You can compete but don’t particularly gravitate toward it. Janet, your brain’s giftedness may align with the envisioning division that likes innovation, variety, and figuring how to do things in a new way. Gina, your brain may function most energy-efficiently from the maintaining, division because you learn the rules of the game quickly and seem to keep score easily.”

“Is competition good or bad for the brain?” asked Ned.

“Healthy, balanced competition can stimulate brain function and add spice to life,” said their mother. “Taken to the extreme, it can turn everything into a win-lose and sabotage relationships.”

“I know,” said Josh. “Gary practices hard to hone his skills but if the team loses—his dad loses it, too. He berates his son or another player for making mistakes or makes nasty remarks. I feel sorry for Gary.”

“Poor sportsmanship,” said their father. “Learning to reward yourself for doing your very best and yet knowing how to be happy for the winner—even when it isn’t you—are important life lessons.”

“Historically, a male’s sense of self-worth often has come from arenas of combat, where he has struggled on the job ladder, competed in sports, vied in entertainment or fought in politics,” their mother explained. “When cooperating becomes more desirable than competing, some males may perceive their main source of esteem—competition—is undermined. While some female brains like competition, women have generally competed more for male attention than in areas of sports or entertainment. And speaking of brains,” their mother added, smiling, “while all four of you have unique brains, each of you—repeat, each of you—carries their dirty dishes into the kitchen.” They all laughed and began stacking plates.

Different strokes for different folks. Fortunate indeed are those who come from a family system that recognizes, honors, and embraces individual uniqueness, helping each person to hone their brain’s innate giftedness—and thrive.