Up, Down, and About the Triune Brain

“My teacher says the triune model of the human brain, described by Dr. Paul MacLean in the 1960s, is an oversimplification.” The young man’s chin was outthrust, his body language muscularly defiant. “What do you have to say?”

“To that I agree. In fact, one of the pluses of the model is its very simplicity, which in turn can be helpful due to its broad explanatory value. Your teacher’s comment reminds me of a favorite quote: If the brain were so simple we could understand it, we would be so simple we couldn’t.”

“So what’s the point in talking about it?” he persisted, albeit less belligerently.

“My brain’s opinion is that knowing something about brain function, even through the use of a simple metaphor, is better than not understanding even that much,” I replied. “Especially now that brain imaging techniques have provided a glimpse into clusters of brain structures that contribute key brain functions.”

“Like knowing that the cluster of brain structures associated with the neocortex (or new brain) is involved in high-level cognition and contributes to functions such as planning, modeling, simulation, and a sense of humor. Like knowing that structures associated with the limbic brain are involved with functions related to social and nurturing behaviors, mutual reciprocity, and memory. Like knowing that reptilian brain structures contribute basic functions that help keep you alive, involve territoriality, and that load and run ritualistic behaviors and motor sequences, including those that allow you to play computer games.”

That perked him up!

“But I thought that part of the brain was nonconscious,” he said.

“Good job,” I replied. “It is. Obviously you know something about the brain.” The young man smiled. “Although more has been learned about the brain in the last hundred years or so than was known in all the preceding eons, the information brush is still fairly broad.” Knowing he was an IT major, I added, “According to Caltech professor John Doyle, in the world of hardware and software, where everything is known about both systems, their functionality only exists by both realms interacting.  Yet, no one has captured how to describe that reality. That goes for the brain, too, in my book.” 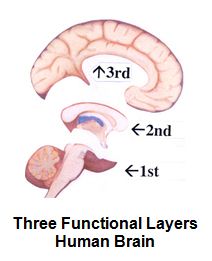 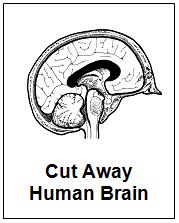 Laughing, I clicked through a series of PowerPoint slides showing the three functional layers. They are combined in the drawing on the left and separated in the one on the right for easier viewing. Then I handed out a summary list of key components, explaining that each layer contributes distinct functions, although all layers interact at some level, as well.

~Contains the brain stem, cerebellum, and connections to the spinal cord; it houses nonconscious functions

According to Joseph Chilton Pearce in his book The Biology of Transcendence (2002), this portion of the brain can take over the physical components of a learned skill, which frees the neocortex to observe and develop ways to improve performance. On its own, the reptilian layer is unable to alter inherited or learned patterns of behavior.

~Consists of a rim of cerebral cortex on the medial surface of each hemisphere and includes a collection of relatively small brain organs including these: two amygdala, mammillary bodies, cingulate gyrus (above the corpus callosum) the parahippocampal gyrus (in the temporal lobe below) and two hippocampi, which serve as the brain’s search engine

Dr. Paul MacLean's recognition of the limbic system as a major functional system in the brain eventually won wide acceptance among neuroscientists. The triune brain model is regarded by some as his most important contribution to the field, even though everything MacLean deduced hasn’t proved out as he envisioned it might.

~Also known as the cerebrum, gray matter, cortex or neocortex, and cognitive or    thinking brain; it houses both nonconscious and conscious functions

“Good job; helpful information!” said the young man as he walked toward the door.

I figured that was high praise from his brain.